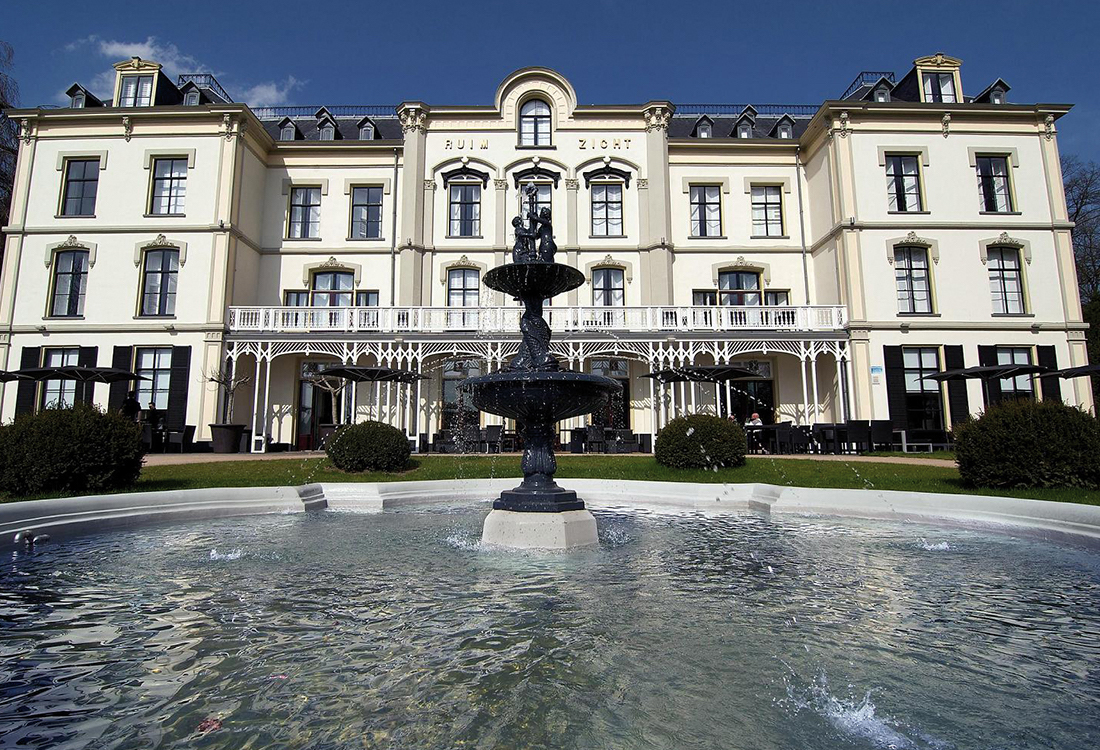 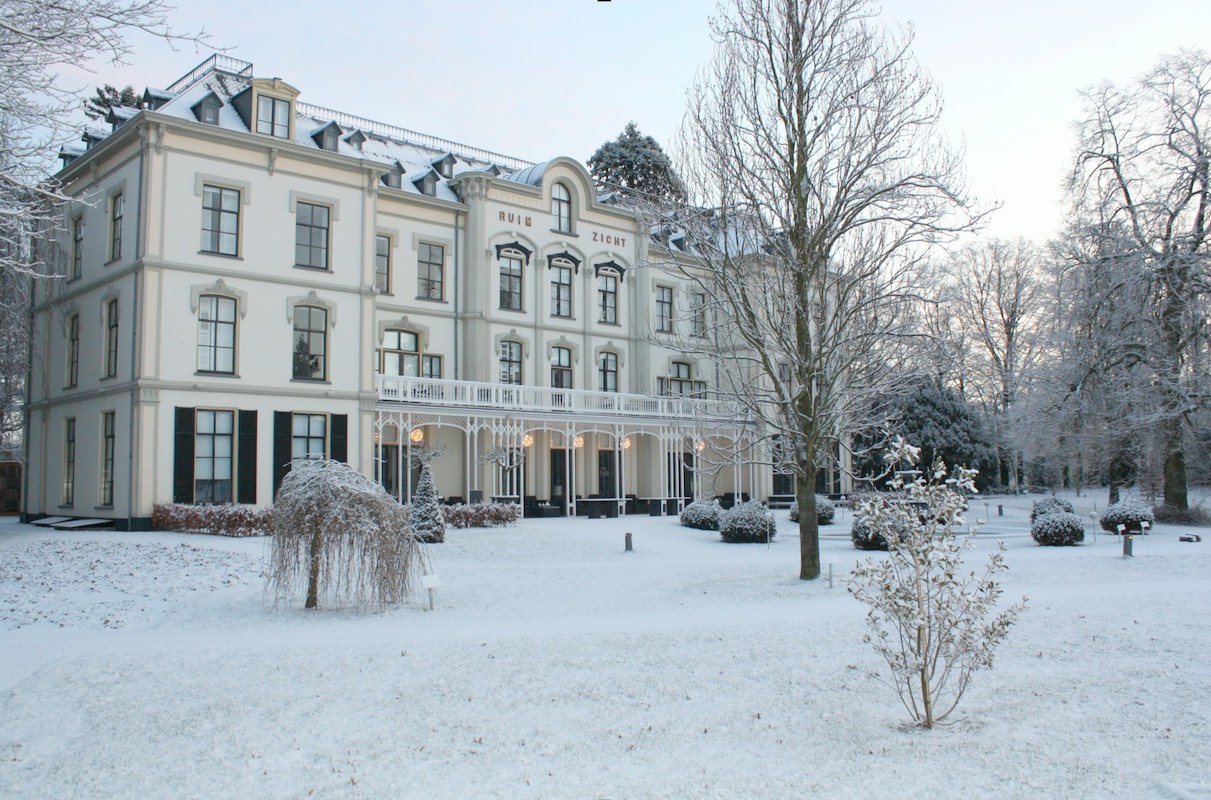 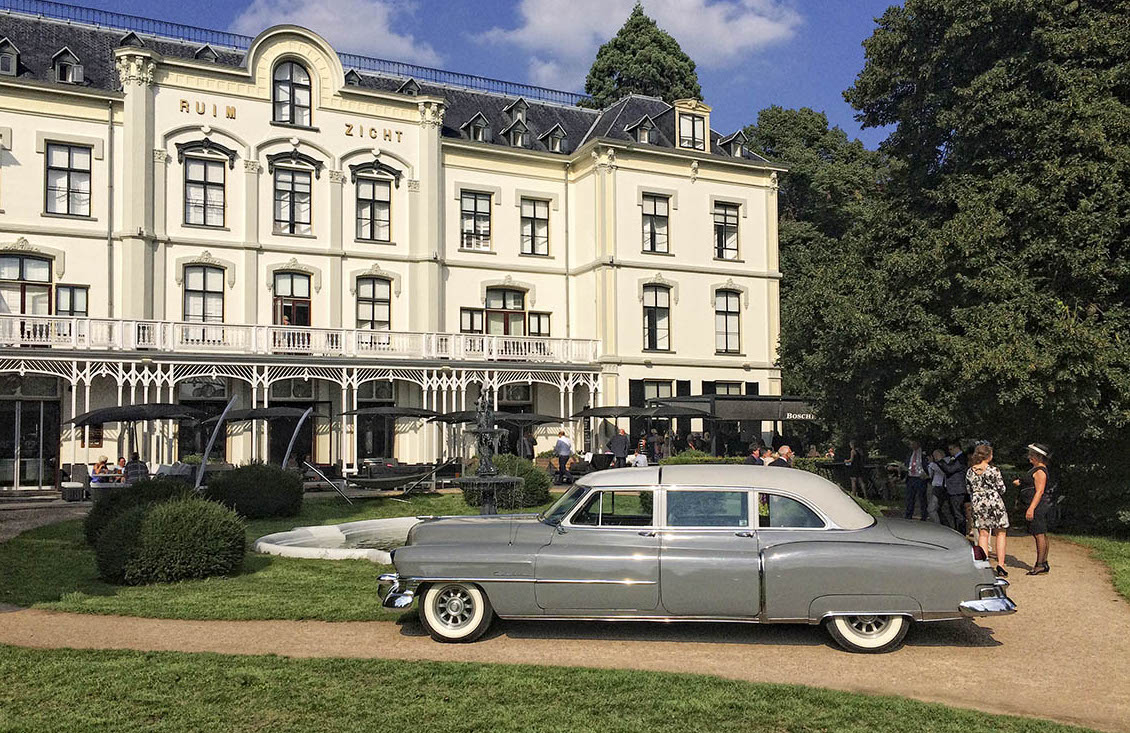 Car
The A18 to exit 3 Doetinchem. Follow the Europaweg to the Europabrug. Follow the road (see signs of Slingeland Hospital). Then turn right onto the Ruimzichtlaan. At the traffic lights turn left. After 100m you will find the parking lot of Villa Ruimzicht on your left, the Villa itself is on your right.

Fewer disabled / luggage drop
There are two disabled parking spaces right next to the hotel. These may also be used shortly for dropping luggage. You reach these parking places by turning right after the tea house in the Villa of the Villa. (Narrow side street) This leads to the back of the hotel.

Note: Not all navigation systems recognize our new address, if your system does not recognize Ruimzichtlaan 150, you can keep our old address, ie Ds van Dijkweg 40.

"For guests traveling to Villa Ruimzicht by public transport there is the possibility of buying an attractive E-ticket. This allows you to travel for 2 days with all Arriva buses in the Achterhoek for only € 8.00. Of course you can also use the ticket to explore the area during your stay. Terms and order via the button below ". 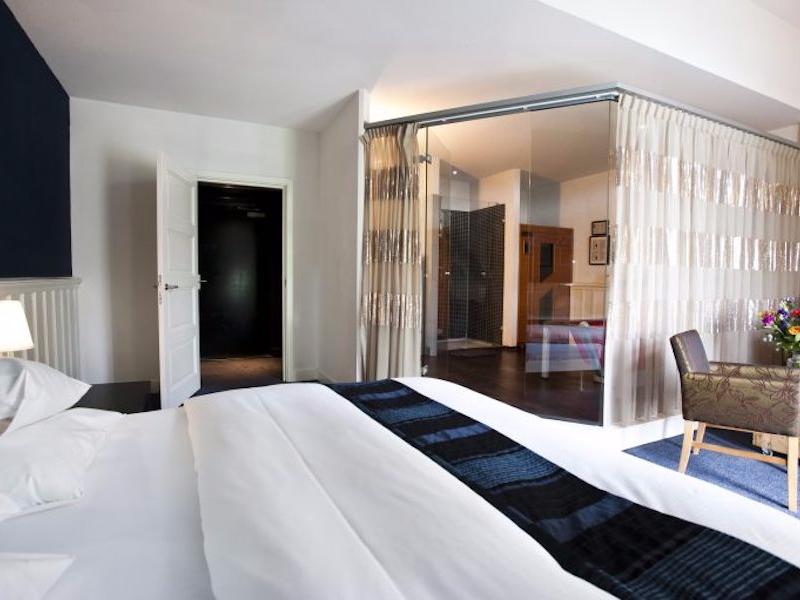 In the Villa you can choose what kind of room you want to stay. Are you a badder type? Then choose one of our water rooms. Romanticists feel at home in a romantic room and a business-oriented stay goes well in a business room with a meeting table and closed bedroom.

Water fun
This room has been furnished with an EL bathroom. For an optimal wellness feeling you may choose between sauna, jacuzzi and steam shower. An extra wellness package will make an overnight stay in this room an unforgettable experience.

If you choose this room, you will not get away from a good bathing session! The big bathroom is the center of the watercolor room. Whether you choose an infrared sauna, jacuzzi or steam shower; the wellness feeling is unprecedented!

We have four different waterpret rooms: 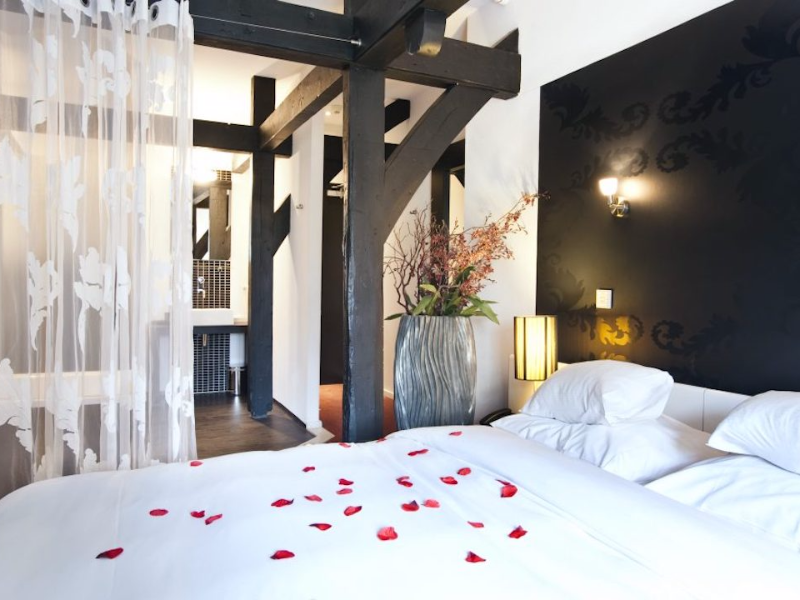 A must for romantics! Tin trap in the room is the beautiful bathtub, obviously provided with deliciously scented products. Furthermore, there is tempting art and some rooms have a loft. For optimal romanticism, order a champagne package and / or a wellness package at the reception!

We have several romantic rooms: 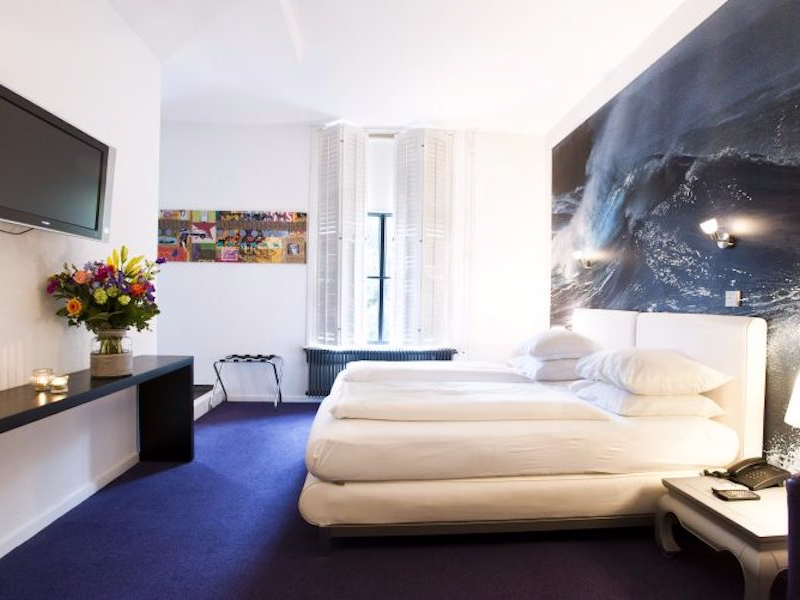 Lifestyle rooms have their own style and décor in which the atmosphere of the historic building is combined with contemporary design. Striking is the use of warm colors and fabrics and the special attention to art. The digital lighting system, the XL Auping beds and the American shutters complete a stylish room.

We have different lifestyle rooms: 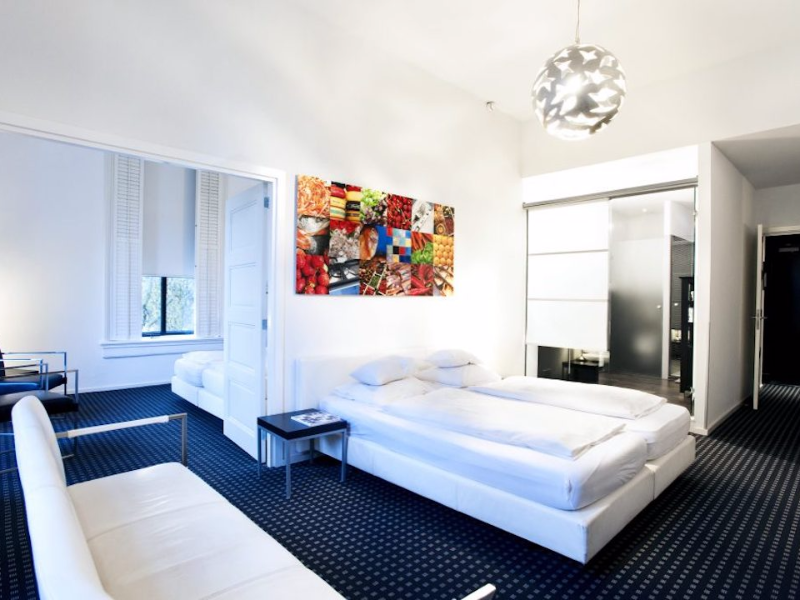 Due to the popularity of these family rooms early booking is recommended in order to avoid dissapointment !!!

Weekend in the Country side with your whole family?

Cozy together, but with the privacy of a private bedroom. Our family rooms have their own style and décor in which the atmosphere of the historic building is combined with contemporary design. Striking is the use of warm colors and fabrics and the special attention to art. The digital lighting system, the XL Auping beds and the American shutters complete a stylish room. 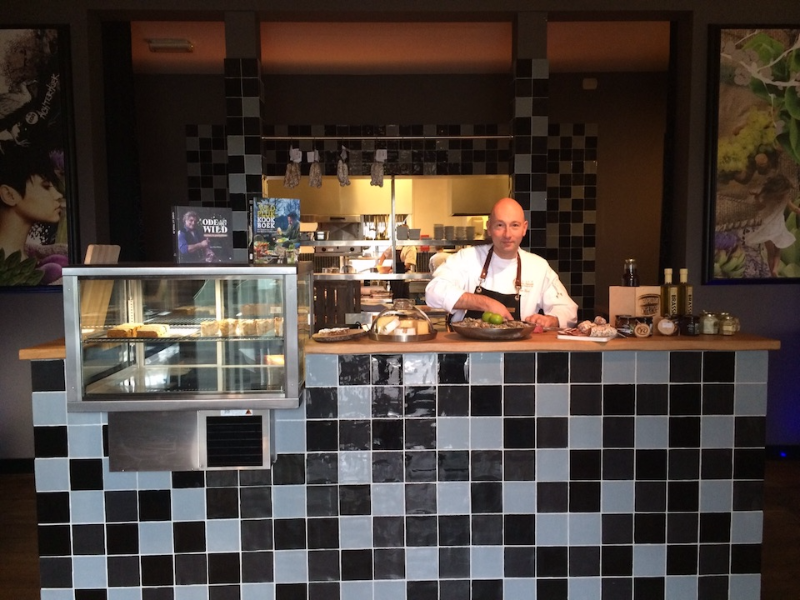 Villa Ruimzicht has two Restaurants what overflow from first class fine business dining or take a corner for a private romatic dinning with best slection of wines to casual dining with the best local delicatessen.

We have a nice card for you. Based on the offer of our local suppliers and seasons, we make delicious dishes for your lunch, drink or dinner. Let yourself be surprised by our world cuisine and take care of our friendly service!

Wildlife lovers have long known: With a visit to the Achterhoek you make your taste buds a great pleasure. The Villa's kitchen brigade also knows how to make the best of its own the best.

Gourmet is good at the Villa and LEV Foodbar!
Chefs Bjorn Massop and Mike are cooking Friday for the season and to the region.
Combine this with two nights in our nice hotel ... that will be enjoyed blowing!

Allow you to treat 6 delicious walks for a long time by our world cuisine and unprecedented hospitality. The next day, you can do it again with a delicious 4 course dinner. 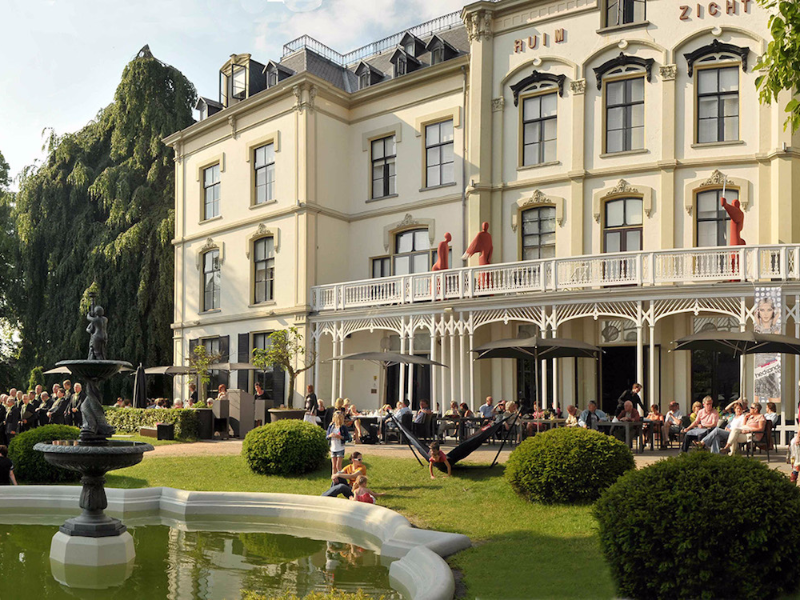 A non-everyday and inspiring meeting environment stimulates the sentences. The tranquility and charm of Hotel Villa Ruimzicht combined with high quality gastronomy and Achterhoek hospitality guarantee a successful meeting. Of course audiovisual equipment is available on request and is free WIFI throughout. 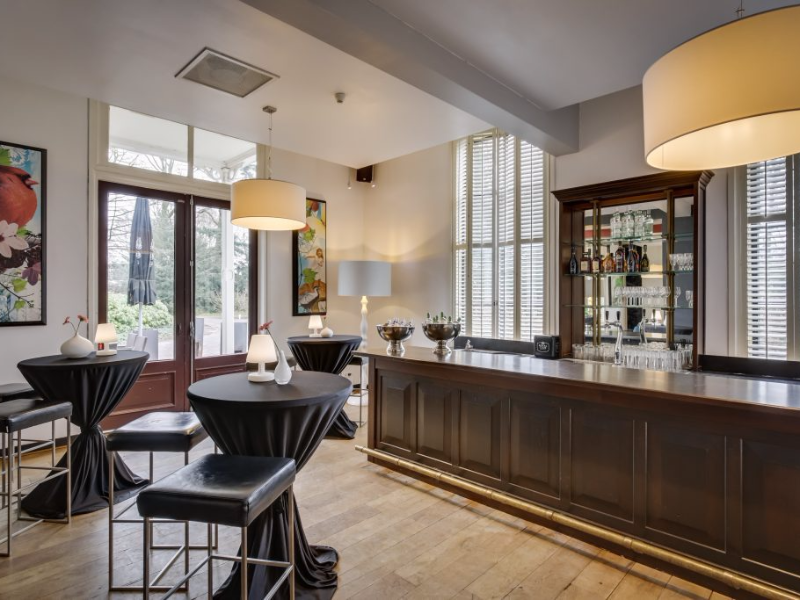 This authentic space is located at the back of the villa and features a private terrace. In good weather, ideal for the coffee or smoke break. No coffee can be seen here, in the room you have an espresso machine. 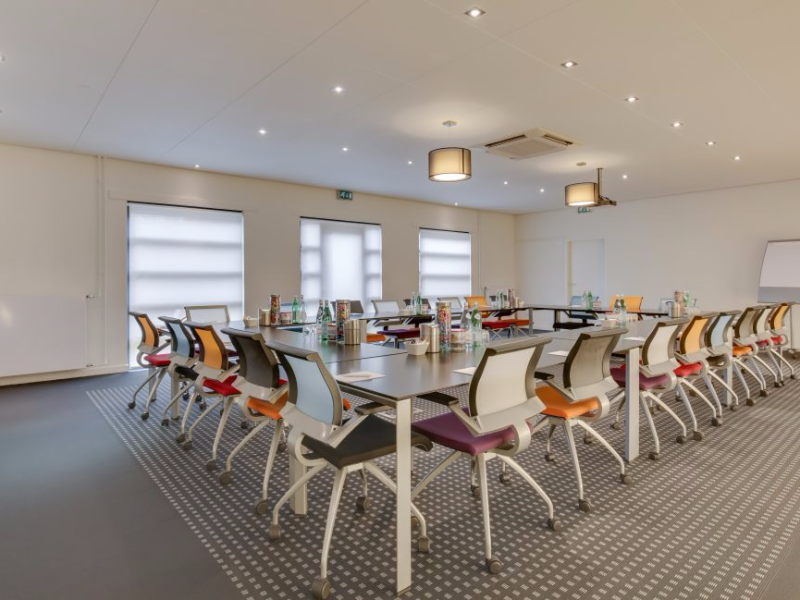 On the other side of the Villa (2 minutes walk through the park) you will find the White House. Here are the Mondriaan and the Doesburg Hall. Both rooms have a daylight, audiovisual equipment and a nice break out room with espresso machine for delicious coffee, cappuccino and espresso. 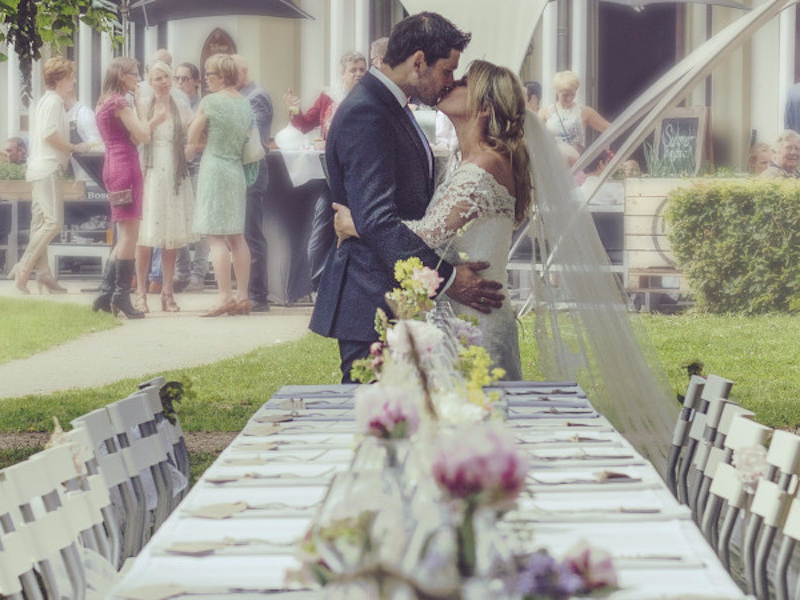 You do not just marry someone, of course, just about anywhere. Villa Ruimzicht offers you everything that a wedding venue needs. With its rustic and romantic location in a park with ancient trees, it is the location for a splendid feast, culinary enjoyment and a wonderful sleep in the hotel !

Villa Ruimzicht is an official wedding venue, allowing you to make your wedding in and out of the trees. Following the wedding ceremony there are many possibilities to make a great day for you and your guests. We will be happy to discuss with you! 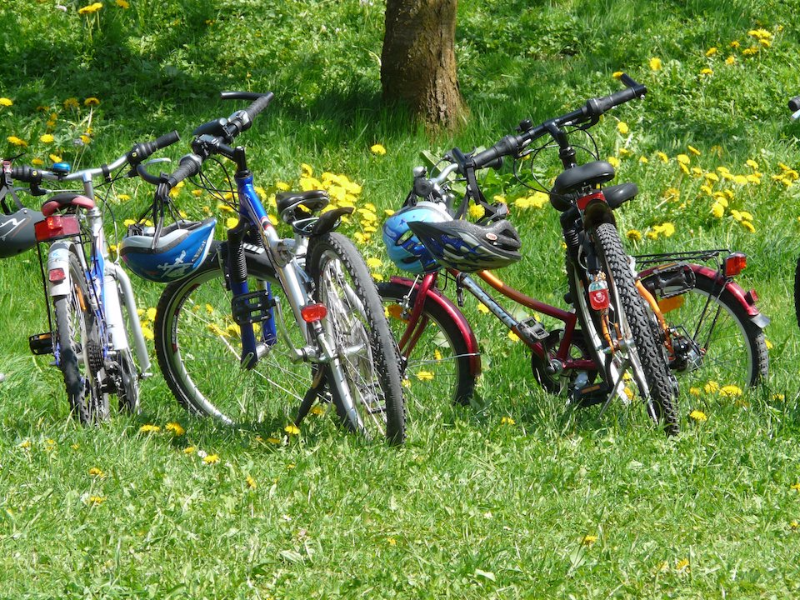 The Achterhoek has been declared the best cycling area in the Netherlands by the cycling federation. Not surprisingly, because the variety in landscape is almost as high as here. Cycling in the Achterhoek is enjoying history, nature, beautiful bike paths and cycling routes.

Not only cycling can be good here, also walking or flinging on an Italian Vespa is delicious in the alternating coulissen landscape.

The nature areas are well-known hiking trails. A separate route has been created for wheelchair users and prams. The dog may be lined up throughout the area. The section adjacent to the city, from the second Loolan, is a dog unloading area. The areas are well accessible. There are bus stops and a car park nearby.

Castle House Bergh is located on the flanks of the rolling countryside of Montferland and on the border of the Rhine Valley in the Dutch-German border area. It belongs to one of the largest castles in the Netherlands and dates back to the 13th century. The castle derives its defensive power from the canal surrounding the building.

VILLA RUIMZICHT IS  CLASSIFIED AS RESTAURANT AND ART HOTEL

Sleeping in Doetinchem is overnight at Villa Ruimzicht. In special themed rooms with all the comfort and luxury. A nice bathroom or a four-poster bed? You choose…

'Think global, eat local'. The motto of the kitchen brigade of Villa Ruimzicht. We usually cook in a worldly way with products from our own region. Come get acquainted!

Life must be celebrated! We would like to assist you! From baby shower to diamond wedding, from graduation party to retirement. You are well-groomed at Villa Ruimzicht!

DO BUSINESS IN VILLA RUIMZICHT

Functionality without fuss. Nothing must do anything! Of course, with some extra ambiance and Achterhoek attention, as it belongs to the standard. We can not do anything else.

Spatial view, before the current main building was built in 1853, a farmer's country house with four rooms, a stable and three hectares of land. The Ruimzicht country house was a short distance from Doetinchem on the way to the Kruisweg. On the east side, the tram went to Zutphen. In 1868 the beautiful country house was purchased by Dominique van Dijk.

The property was designed as an intern for talented students of the Latin School . After some trembling, the seven oldest breeders took in. On November 26, 1868, Ruimzicht was celebrated on a festive basis. An expansion took place in 1872. Due to the increasing number of breeders, Ruimzicht turned out to be too small. In 1885 the house was enlarged and decorated in the present form. The two corner pavilions are upgraded and the back wing extended. Until 1953, the house served as an intern. Then it was purchased by the municipality of Doetinchem and the Municipal Lyceum was incorporated. Villa Ruimzicht with teak and arboretum was designated as a national monument in 1999.

Dominee van Dijk also worked intensively on the setting of the surroundings. There was a park in landscape style with an educational aspect. A wide range of trees from home and abroad was planned. Thus, the current arboretum was formed with about fifteen different species of trees, of which there are now more than 100 years old.

About J. van Dijk Mellezoon, the Apostle of the Achterhoek

Born April 16, 1830 in Tzum. Is located in Franeker (farmer and merchant's shoes and matshop), living in the Frisian Réveil. 1862 preacher Christian Divorced Gemeente Doetinchem (singular gifts). Was deposited in 1869 because he did not build the Chr. Divorced Church but the construction of the Rev. Church as a whole had in mind. Thus became the Ned. Herv. Missionary municipality born.

Van Dijk founded Christian schools in Zelhem, Halle and Wittebrink. He himself raised the money in the immediate vicinity, but also in the Netherlands, and concluded with his church council a ten-year covenant, all his own physical advantage overcoming, in self-denial with the municipality to accept a labor for the sake of misery and the need of times and the salvation of the other members. "

Established in 1867 Association for the Promotion of the Internal Shipping. On November 26, 1868, Ruimzicht was celebrated on a festive basis. At full capacity: 90 residents. Ds van Dijk founded a gymnasium, a girls'internaat, home evening red, a parsonage and a chapel. Schools around 600 children (1875). Christian Philanthropic Establishments or the Doetinchemical Work called. Band with Evangelical Alliance. Friend of Eduard Gerdes, the writer of Er ruins the clouds ... 1909, January 15: Van Dijk died.

First a small farmhouse with four rooms, a stable and three bunderland. Van Dijk made it the first night for seven youngsters. In 1884 decided to build a larger building on the same ground. There was a small cabinet organ in the large dining room for the accompaniment of the song. The inhabitants of the villages around Doetinchem called Ruimzicht 'The Castle of Doetinchem'.

About the financing of Ruimzicht

Shortly after the second e World boarding school was moved to Thorn and settled several schools in Villa Ruimzicht 1971 - Opening of the current main building at Kruisbergseweg. The Rietveld Lyceum has two unique buildings. The stately Villa Spacious, built in the last century. And the modern main building designed by Gerrit Thomas Rietveld. The famous Dutch furniture maker and architect.

Horecaduo Kees Hensen and Dennis Kaal bought Villa Ruimzicht in 2007 in a renovated state and renovated it into a contemporary 4-star hotel with 42 spacious hotel rooms, restaurants, a cooking studio, a veranda with lounge terrace and various meeting rooms. The starting point was to return the Rijksmonument to its old grandeur and to set contemporary food and art concepts where Doetinchem is proud. Stylish, centrally located and with a historical character.

NOTE : special message from www.above-5.com in the region of 25 Km or maybe around Doetinchem is no 5 star hotel availabe and we from Above-5 we would recommend as a perfect alternative choice taste of luxury in combination with art and great dinning experience